With last weekend being too wet for any digger action, I had a hankering for more digger work, so with the balmy temperatures and nice firm soil conditions we were off again! w00t!

After all the recent work on Project G and Fred meaning that no more Digger Action was required it was back to the older stuff that was getting over their wet winter.

First up, I had a go on the culvert on Project G – my cunning idea to recycle material for the culvert didn’t last long as the first bump with the digger bucket crumpled it up somewhat beyond repair, so it wouldn’t have dealt with the volume of soil – oh well, may have to stump for a real culvert pipe.

Secondly, I was keen to start extending the River Track again and I made good progress, it was awesome being this close to the River and see and hear the uniqueness. Unfortunately I came across a reasonably solid rock ridge and as I didn’t want to cross the creek I made a nice corner and traversed back, I had a couple of goes at making another corner but it wasn’t working out. However third time was the charm with another nice corner made but then shortly afterwards I was stumped by another section of rock – which may or may not be breakable. In consulting the Digger Oracle, he gave me a couple of options to ponder over. It was frustrating, but I am confident we will get a good outcome. 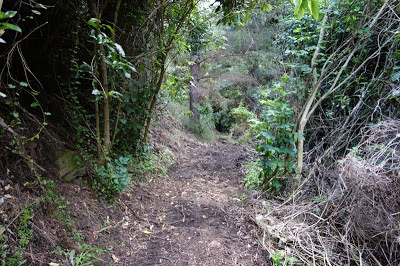 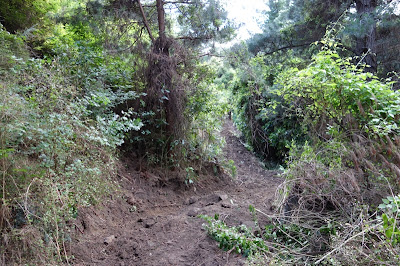 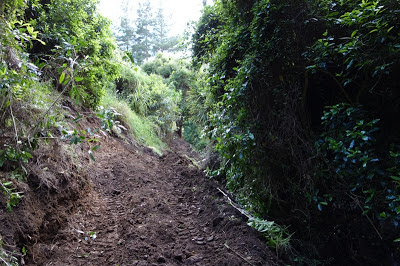 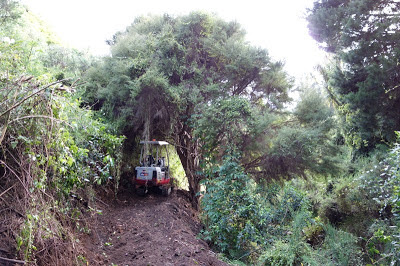 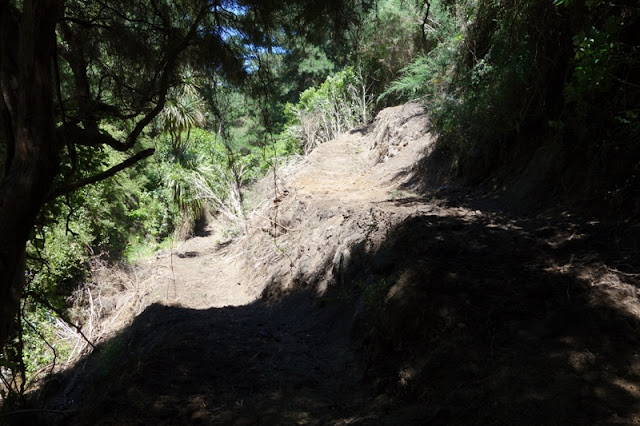 After this, I decided to tidy up the exit from the rock ridge on our unnamed river track section that needed blowing up and made a fun wide corner that takes you right up and under a rock face cavern type thing which if I say so myself is pretty cool. I was also fortunate to be able to keep going and managed to connect the two tracks up after all, no explosives required, which is kind of good, kind of bad! A slightly steeper climb or descent, but nothing too long or difficult. 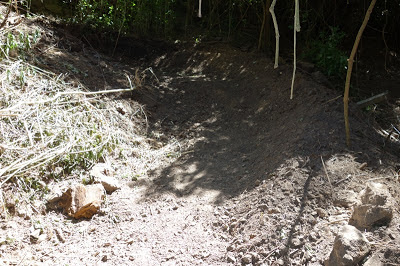 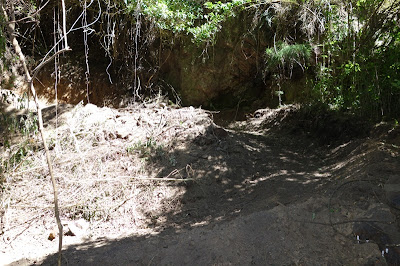 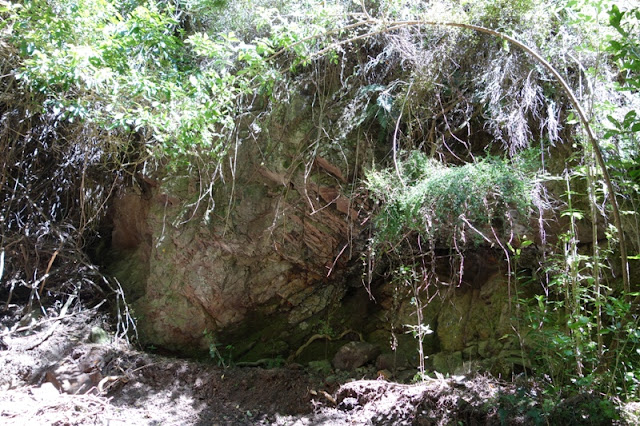 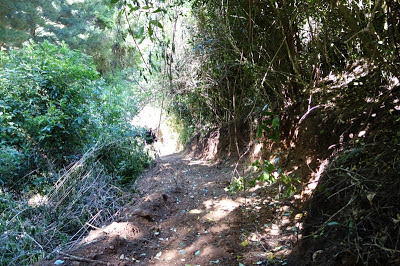 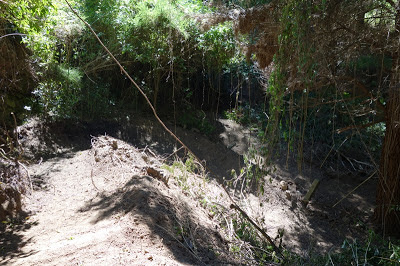 Then, since I seemed to be on a roll, I decided to tidy up another extension that we were coming back to, the ‘rocky’ switchbacks that will join the River Track to Frank’n’Furter, it didn’t take too much to sculpt it out and plant some dirt and rock ready for some Berm Queen action.

I thought I would finish on a high, so just did a bit of house keeping tidying up a couple of river crossings and the overflow from the lake and then parked up the Digger after a good days’ work.

Alister came out and is valiantly extending his line on his singletrack – the man is a legend. Oh yeah, that reminds me, Alister asked me to start the track at the bottom to help take some of the steepness out. It was actually quite difficult to be delicate with the bucket, I decided to do too little than go too far. I can always come back and do a bit more under direction from the master.

Sunday, we had a pleasant sleep-in and a lazy breakfast and then it was off to the AYUNC track, I was a bit anxious to say the least, as this is the track of my latest downfalls and is at the cusp of my experience and skills. But as with most things, the reality didn’t quite match my imagination, the climb being quite uneventful and the corner with the slip was a doddle to clear, the narrow rock face has hardened magnificently and I was soon diggering and traversing away happily. It was slow steady work but considering the terrain it was good, I got stuck on another rock edge, making a silly mistake of not regularly resetting and thankfully Shane got me out easily again – I understand the principle of getting out but I haven’t got the nerve to be happy with the soft edge and seeing all the dirt go downhill with me on a funny angle. 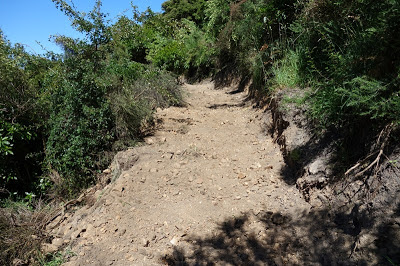 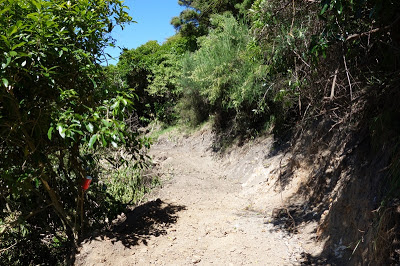 I kicked myself for getting stuck again and promptly took my anger and frustration out on the rock that was in the way and I bashed it into submission and then suddenly it was easy and fast digging. Crazy really. I got to an area that should be the beginning of a near perfect corner in amongst some old Mahoe and ancient and old rock formations. Three quarters of the way round and this large rock that I thought was a surface floater turned out to be an iceberg. After much digging down and a small attack on the Mahoe, I have discovered that both the Mahoe and the rock have a symbiotic relationship and were tied up together. I was about to give up and cut a corner in front of them, I decided to give it another go and finally made the rock start to move. Another 20 minutes of bashing and digging and general swearing, I managed to make it wiggle. At this time I was getting dark, so I gave up. Hopefully a combination of time, an axe and a grubber will help get to those ‘hard to reach places’ that the digger bucket couldn’t get into it. Or something else will come to mind. 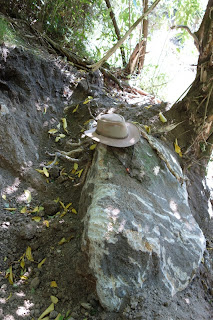 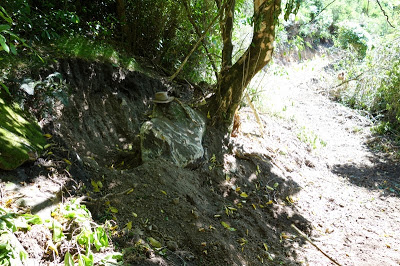 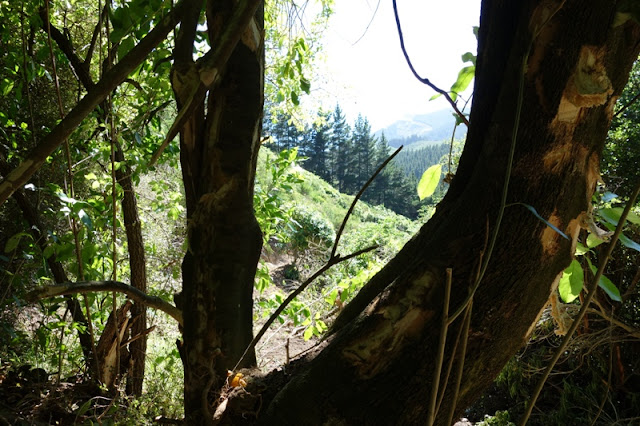 Another potential frustration, but when I look back over the weekend, we have cut quite a bit of trail, opened up two gaps in the trail network which will help with the riding loop no end, these new additions should be in riding condition just after Christmas, which is fantastic news. Then when you consider this time last year, I was freaking out getting the Digger off the trailer and wasn’t doing any track work at all, I should be pretty stoked, which under all the expectations I am ;o)

Another uneventful descent, yay! Another digger weekend over and a lot of work done, soon it will be time to test them under my wheels, I can’t wait.

Lisa, the club and I would like to extend to you and yours a Merry Christmas and a Happy New Year.

I am happy to show you around and we would love to see you out and about on the trails at Haven MTB Park – there is nothing quite like it.

Digger action will resume on the 28th December – weather permitting.
The first official Dig Day of 2013 will be Saturday 12th January from 10am.