After not being able to get a Digger for last weekend’s Dig Day, we were able to secure one for the long weekend – the weather forecast had gone back and forth with ok and not so ok weather.

Shane, one of our neighbours and local Digger expert, was coming back to give me lessons and nail the tricky corners on Fred for me.

Thursday night I decided to start an old new track – the Long Cut. We had started this track about 3 years ago, but it had slipped out with some big weather. The plan with the Long Cut is to connect Scollywood to Eagles Nest by avoiding the 4WD track in all it’s sharp steep glory.

I started, as you do, at the end, not being brave enough to try and start a new track on a 90 degree angle across a super steep bench. It was a nerve wracking ascent up the 4WD track especially as it is getting overgrown again, but I made it up. Nice views from the top, I decide to do a bit of tidying and then start the track. I get about 30m in before I call it quits and walk home over the tops, very pleasant. 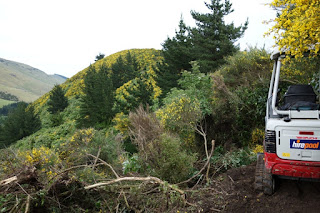 Friday, I’m up bright and early and continue the fun that will become the Long Cut.  A couple of hairy moments and rock, but overall a good time and effort traversing across the contour. I almost got trapped by a waterfall / gully / rock face but I sneak on by. But then I do get stuck, with a large rock ridge, I start to build the platform for the corner, start the long job of raking and then head back cleaning up and then raking again! 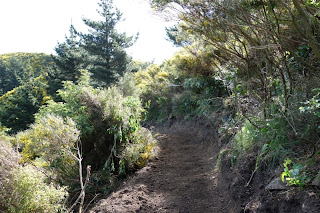 A lot easier to drive down, but with the long grass it wouldn’t have been pleasant in the wet. I had a bit of a play destroying errant broom in front of Fred and then parked up for the night, feeling chuffed. 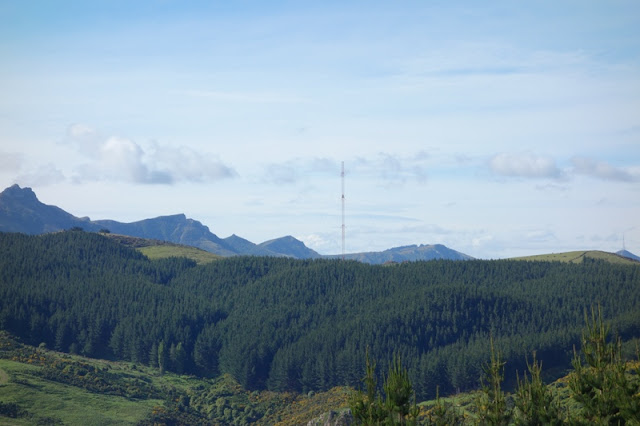 Saturday is the day Shane was coming round to help, I started by doing a bit of work on the last section on Project G, climbing up under Grand-Dad Pine and working on the corner. Then back off to Fred for Shane to get stuck in. It started to rain but we didn’t seem to be too affected under the canopy, in fact I didn’t realise it was raining until I heard the rain hitting the leaves of the Poplars. But the sun pokes out again, and Shane is bursting to get going. Needless to say, I am very happy that I don’t have to drive down the 4WD track in the wet.

Alister also came out to continue cutting a line on his secret singletrack – it’s going well and looking great so far.
Lisa also did some great work scrub cutting the upper slope on Chicken Run.

Shane starts by cleaning up the first of the corners on the fun that is planned to get down to the traverse track that snakes beside the river we built last time. The second corner is the steepest and Shane creates a pretty impressive gravity berm – it should be a hoot to go down, quite a challenge to climb. We will see how it seasons before deciding to open and flatten the corner. From here Shane sneaks back down and up to the next traverse and does some digger showing off to get up to the traverse and starts climbing and weaving along close to the boundary taking up as much land as we can.

We then go back and doze down to the next planned traverse and then the heavens open, this time it’s pretty heavy. Shane does a great job of weaving in and out, up and over obstacles and creating a pretty exciting track which was quite narrow and a drop down to the creek. I ended up going away as I was getting pretty anxious watching the work, but Shane had it all under control.

We almost had the bottom traverse in line with the top line, albeit with a pretty big height difference when we got the call for dinner. Shane expertly drives back into the Pines and parks up and we enjoy a hearty meal after a long days’ work. Such is the addiction of diggering, Shane is super keen to finish the corner, particularly as it was way way beyond my skill level to construct. So we make a time to play again on Sunday. 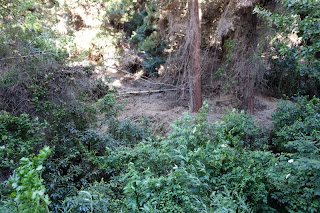 Unfortunately it pretty much rained all night, quite heavy at times. On inspection on Sunday morning, the tracks were pretty damn greasy and I wasn’t looking forward to getting the Digger out. I while away a bit of time working on the traverse, corner and traverse that will connect up the two tracks that Shane had already built. I was just raking it out when Shane popped over and finished up the corner before more Digger acrobatics to get back up to the high line and then start the job of digging down to the low line. It was pretty impressive to watch, after a pretty hairy negotiation across the greasy track, Shane starting throwing dirt over the side, both raising the low line and lowering the top line. Again it was an impressive sight to watch. A nice platform for the corner and we are done. Fred is now connected up and the final track design is done – all that is required now is for some time for the new track to dry and then the hand finishing. 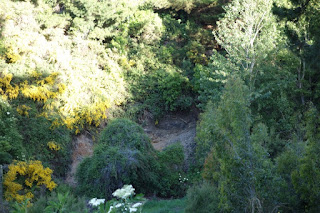 It was touch and go getting the digger out, extremely greasy and the rubber tracks were sliding all over the place. I certainly couldn’t get it out. Watching Shane was impressive. We had just over 20mms of rain over Saturday/Sunday so not the best digging weather.

We tag team out, with me back on the controls, things become more sedate. I kill gorse and broom along the road and then cut the track above Grand-Dad Pine connecting up the corner. Initially I was daunted and dubious by this short-cut suggestion that Shane offered, but it ended up going without any hassles. I am pretty chuffed too, this means that Project G is also done in terms of track design. One of the features still needs to be made and then hand finishing to complete it. Exciting times.

Both of these tracks are going to be signature tracks I feel, both different, both making up the most of what is available, both should be pretty fast when they settle in.

The trail network is increasing quickly at the moment, not long now before they will be ready for riding and we move onto new areas to play. 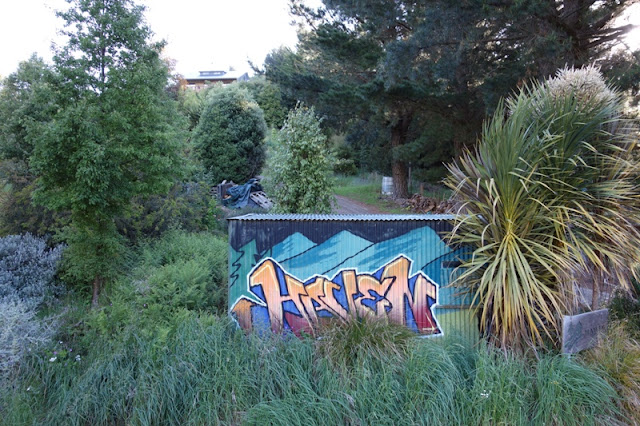 We hope to see you out soon.