We had our Dig Day this weekend, postponed from the inclement weather earlier in the month.

Forecast has been good, bad and in-between for some time, but I decided to take a punt and book the Digger – the weather gods on our side this weekend – sun, more sun and a little bit of wind.

It’s been a while since I have driven so I thought I would get some familiarity by working on TearDrop. We had always planned on coming back and tweaking the berms – I was also keen to cut out a bit of the height as well. Under the expert tutelage of the Berm Queen, I dug and dumped many bucket loads of dirt ready for sculpting. Most of the berms are now twice or three times as high – so they should roll very well in a few months. Mrs Haven did a great job of shifting the dirt and getting the berms looking sweet.

Feeling chuffed and confident, I wandered off to Project G and finished the corner I started last time and had gotten a fair way along a traverse, when Shane popped over to have a look at a problem on Fred and to teach me some tricks. After telling me it would be easy, we headed back to Project G and Shane started trailblazing. It was great to see the track take shape. After this, I continued the traverse under Granddad Pine and stopped at a proposed corner, I then back tracked and tidied up and started the next traverse from below which also worked really well. 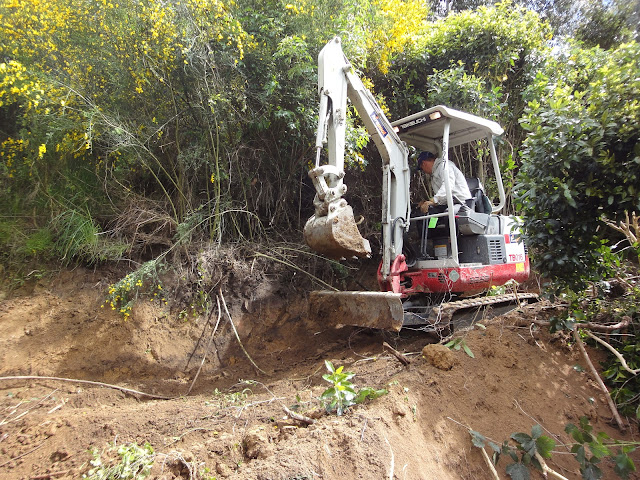 Feeling good and with the day winding down, I headed off to Fred where I was going to park up for the day. Oh, I should have listened to my brain, but I decided to head along for a bit and got stuck and had a whoopsie. Thankfully I  was ok, and Andrew, Alister and Ursula helped get me out of the poo. Yay for helpful, patient neighbours. 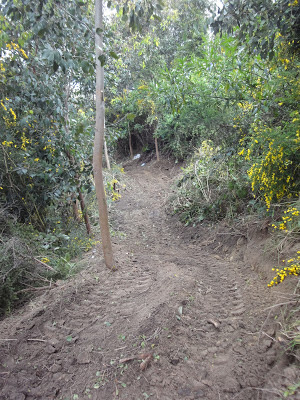 Sunday, Lisa was off with friends, so I geared up for more digger fun with Shane – who by this time had the bug for more Haven track. Allister, our hard man of trail building came out today, as he was busy doing the 6 hour on Saturday. Allister was keen to be given an area to build a track, so we scoped out a secret area for him to work and explore in. I can’t wait to see what he produces, we always get great tracks from Fat Ali!

By this time, Shane was here and had fired up the Digger and was off exploring on Fred. We started to build the second traverse that will eventually connect up the top traverse, this was a magical session amongst the natives and the creek and pretty easy digger at the hands of the master. In no time we get to the bottom of the Pines and Shane says he could just nip up and connect to the top corner I had started but didn’t know how to do. I was amazed to see him climb up a pretty vertical slope and then cut what will be a pretty fast and fun corner. During this, he showed me a couple of tricks that once I have practiced a lot (on flat ground) will come in very handy for Haven diggering. After a pretty intense show of digger ballet, he is up on my old track and hands me the Digger back – his job done. 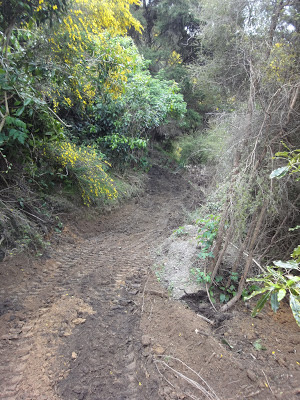 I opened up the corner and plonked a lot of dirt ready for the great downhill bermed corners that will appear in the not too distant future. I meandered back along my track, tidying up and piling up dirt ready for bermage, a few kinks made for the water that we discovered after the track was built. I was going to call it a day, but decided to head back and do some more work on Project G – and it was a good thing too!

I was experimenting again with a short chicane, but it wasn’t working out, when I had an epiphany and thought it would be good to extend and traverse the unused section. After a bit of work, and a sacrifice of a gum tree that I bumped which snapped, and suddenly it all worked out. After this, I still had time, so I started to make the corner I had left and I was concerned about the difference in height between the two traverses, but I worked away moving a tonne of dirt and slowly made my way to connect the dots up. I’m almost there, but will get some expert guidance before the big push. 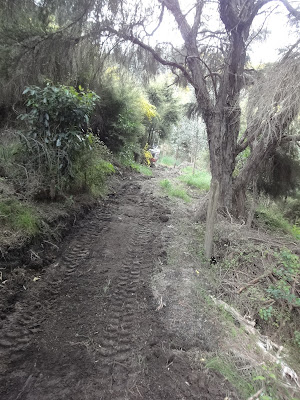 At this time, Mrs Haven came back from her day of fun, just as I was finishing up and had kindly pooled all the tools I had left scattered over the place. I was tired but felt good at the amount of work we had achieved this weekend – plenty of sun too for a day that was supposed to rain. One more dig day and we should be able to open both Project G and Fred – good times.

Plus there is plenty of track to ride right now that is super duper fun and flowy.

Hope to see you out this summer