October being a special month with five Saturdays prompted me to want to try and get the Digger out each weekend, well I made it happen. The weather didn’t play ball the whole time, but it wasn’t too terrible.

The recent great weather and wind had dried the new tracks sufficiently to allow me to head back to the AYUNC Track. At start of play I had made it to the third corner and fourth traverse. On the way up, I fixed up the odd bit of storm damage and then got stuck into more trail building.

I started to encounter a lot more rocky terrain and this slowed me down, I still managed to get a few dips and climbs and wiggles on my traverse. I found what I thought was the perfect quick corner, however as these things tend to be, it wasn’t quite as perfect as I first thought and it took a lot longer than expected and still needs a bit of love.

On the fifth traverse, again it was pretty rocky and with a bit of  a nervous time with loose edges and what felt like steep sections on the digger, I came to a major rock face, that I couldn’t quite break through. Instead of doing something foolish, I decided to head back down and to tidy up the corners as well as clean up the mess from the traverse above. One of the side effects from building trails above each other, is that crap goes downhill. It does mean a lot of cleaning up each session, but it will be built soon!

Col came over for a visit as I was widening one of the corners and as I was getting a bit tired on the digger, he took over and soon finished this and another one, so they are all ready for the finishing touches by hand. We also fixed up a chicane that didn’t work and then went for a hoon with the digger to Frank’N’Furter, where Col fixed up our worst storm damage in about 30 mins, which was a great relief!

So as I look back, and having ridden all the new tracks, it was a great month for diggerage!
Over 3 kilometres of new track have been built, and that’s just one way!
They are also pretty good to ride now, and they will only improve as they settle in and harden up. I can’t wait for the natives to bounce back and take over. 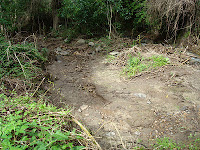 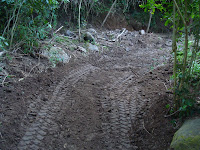 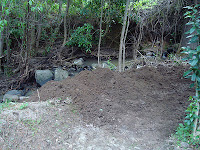 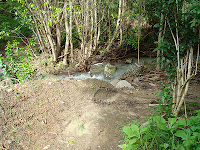 Here is a new leaner pine that happened after the storm. 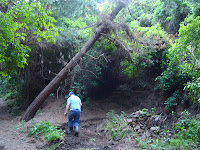 And here is the AYUNC Track in it’s glory and to the right, the 4WD Track & Miners Track. 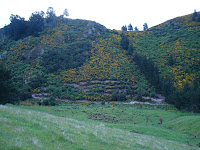 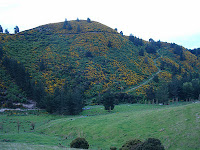 The rock breaker and digger are booked already for the next Dig Day, we will need plenty of people to rake the new stuff, work on the trail corridor on the old stuff and to plant trees. Plus you can always ride your bike!

We hope to see you out here over Summer soon.
Mr Haven.

October was the Month of the Digger