We have just had our November Dig Day and whilst we still got on and did a lot of good work overall for me it was a bit frustrating, the weather didn’t play ball at all. However because it was a long weekend, we kind of made up for it on Friday.

It started out well, working on clearing a slip on the gum road, then down to the next gum road where I promptly got the digger well stuck in the mud. Thankfully after many attempts and many hours of swearing Allan and I pulled it out with the truck in the wee small hours of the night. The Digger was caked in mud!

On Thursday night or rather early Friday morning it rained quite heavily, not quite sure how much, our weather station rain gauge has been playing up, the test tube back up had about 20mm of water in it, with the weather station saying 10mm. But either way it was enough for there to be puddles on the ground and enough for me not to be able to take the digger on any of the new tracks. Basically the risk of undoing all of our hard work to date it with heavy treads and soft soils. That and I only like to get stuck once a weekend.

But that’s not to say there wasn’t plenty of work to do! Much to the dismay to the Berm Queen, although I have to mention it was at her prompting, I piled up many large piles of dirt to be made into berms on both Frank’N’Furter and Anti Disestablishment, at last count seven of the baby corners now have berms ready to begin seasoning to match the many existing berms. On top of this, I piled up more dirt on the newly widened corners on the climb on Frank’N’Furter to make the descent a lot more fun.

After this, I decided to have a break from Diggering and go and try out the Rock Breaker on the cliff on the As Yet UnNamed Climbing Track. Unfortunately, I couldn’t get the tool to fit in the slot (hur hur.) So after consulting the manual (yay for the internet,) and Colin that evening it seems that I had received the wrong size tools.

So with that setback it was back to Diggering and I was beginning to scratch my head about what to do next. I piled up some mounds of dirt on a couple of straights on Anti Disestablishment to be somehow made into mini rollers. Wasn’t sure how, but I was sure it would work out. After this I decided to explore an old trail Col and I had built way back in the day and had meant to get back to but didn’t. It was a bit overgrown but the bench was still there and it didn’t take too long to get it back into shape. The biggest issue was avoiding all the Onga Onga which has sprung up. It was interesting to see how we had progressed in trail building particularly in corners as this was a bit short and steep by our new standards, we will come back soon and put the new learning into this corner. I struggled to find the rock cliff which stopped us last time as nature had come and taken over and everything was green and lush, but soon I was extending the track, the plan will be a nice sweeping set of corners to connect to the rest of River Track.

While I was beavering away, Lisa was working hard clearing the trail corridor on the Upper Tracks and then into the berms I had freshly piled up. A solid six hours of work!

We decided to call it a day early and I felt good about the progress made, most of the recent tracks was essentially at the hand finishing stage and would now be off-limits to the Digger so it can bed in nicely for Summer.

Colin popped in after an assault on Mt Oxford and we were planning what we would do over the weekend. Unfortunately again it rained heavily overnight and much more than Thursday night. Again this pretty much meant no Digger on anything new. So Plan Z was brought out, and Col started to blade out the line for the proposed Skills Area.

I went off to vainly try to get the rock breaker to work then heading in to town to get the right size tools. Lisa and Luke planted out Anti Disestablishment with natives. I return and get stuck into the cliff with a now working rock breaker, but it wasn’t terribly effective. Three hours later I had made a difference but not a significant one, in fact it was probably more effective with the digger. My shaken back and wrists would attest to this. So I head back to be Col’s rock and rake boy. Col also hit a bit of a snag with another cliff face that was resisting the Digger. However after an afternoon of toil Col makes it through and we call it another day.

More rain overnight but not as much as previously, but this still writes off any Digger Action on fresh tracks. So we head back to the Skills Area. At the end of the cliff section Col was working on, the plan was to build a great big timber wall ride, however after pulling off all the tangle weed and vegetation we discover that Mother Nature was one step ahead of us and left us a great big natural one for us! With a bit of tinkering on both the entry and exit, we should have a great big wall ride and a great big berm for people to play with. Of course the sun breaks out mid morning and turns into a lovely day and one where I got quite badly sunburnt! 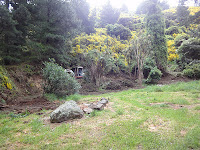 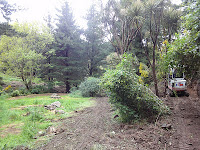 We also bladed out the entire course for the skills area which we hope to get under way and potentially finish by Christmas 2011. Without giving too much away, we used the awesomeness of the Digger to collect all the random huge rocks around the area to be put to use as a rock garden. There will be whole lot of other tests for safe skill development…

We had another go with the rock breaker in another rocky area, with Colin confirming that it was pretty useless, so we may have to re-think our route in that area as well. From here it was driving over the mini rollers with the Digger which worked pretty well, and putting the culvert in on Anti Disestablishment and that was job done for another Digger weekend. Not a lot of new track completed however almost all the current tracks are at a hand finishing stage and should be ready to shred by Christmas.

We hope to see you over Summer
Mr Haven.

Rain and Mud but the Show Goes On