Since we have quite a bit of coin to use up on Digger hire to make new mountain bike trails and I need to get more experience, I got the Digger out again at Haven MTB Park this weekend past.

I had a cunning idea to save my poor back by spending Friday evening digging holes ready for tree planting on Paddock Racer. Of course it took a lot longer than I imagined as there was space for PLENTY of holes, so I am glad I didn’t have to dig them all by hand. But I finally finished by Saturday lunchtime and after depositing some dirt for Lisa to fettle some of the berms on Anti Disestablishment, I headed up to where I had left off on AYUNCT. 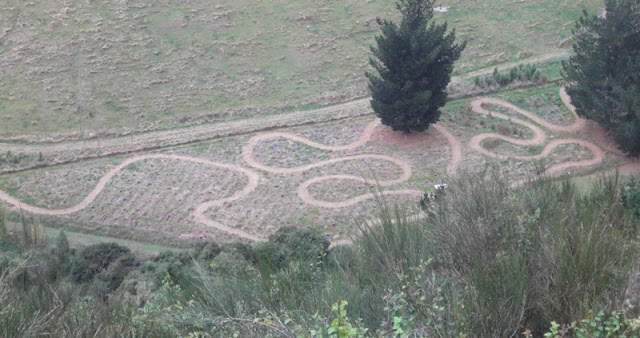 By this time, a heap of people had arrived for some hooning, so I waited for them to come off AYUNCT, had a wee chat and then started my journey along the traverses. I tidied up the trails on the way up and had a go at fixing the fourth corner which had a wee slip and was generally steep and tight. Just as I was about to head up after giving it heaps, I dropped a track. The crew that was enjoying the tracks had gotten even bigger and Lisa was entertaining them, I had a brief chat and then back to to the job at hand. After acquiring the requisite tools, the track proved difficult to stick back on. Getting some expert assistance, he also had a bit of trouble getting it on (which did make me feel better) and then I was off up the hill but had to stop as it was getting dark. 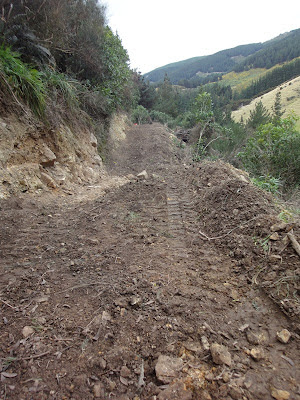 I alighted nice and early on Sunday and got back into it. I made short work getting to the rock face and started the job of reducing it as much as I could, so I could squeeze by. I was pleasantly surprised that it all went quite easily. I had to stop last time as the Digger would pivot after getting a hold of the rock and with the bench so new most of it would travel down the hill, scaring me somewhat. But now I was chugging along and at a good pace until I dropped the other track and not noticing slewed the digger sideways and precariously close to the edge. I managed to refit the track in no time, but couldn’t extricate myself from my predicament. Luckily I know when I am beaten and got some help. I had clearly done a good job as they weren’t keen to fix it either. So I had to to get the help of our local expert again and he got the digger out of strive quite easily and nonchalantly. Everyone else had they hearts in their mouths. I was handed the Digger back and off I went again. Many hours later, I had made a difference but it was hard yakka. We were visited by some of our farther away neighbours who are also keen to dig tracks and we had our first proper introduction after a number of hellos. I was keen to get back into it, so Lisa continued to entertain whilst I continued to claw away. My nerve was a bit frayed and I was a bit scared to go near the edge where I got stuck as it had eroded away in the process of getting the Digger out of trouble.

But all of a sudden after many hours I was through and then the task ahead was to see how far the rock seam ran and how much of a bench there was. Thankfully on both accounts it was back into deep black soil which hardly a rock. Bliss. 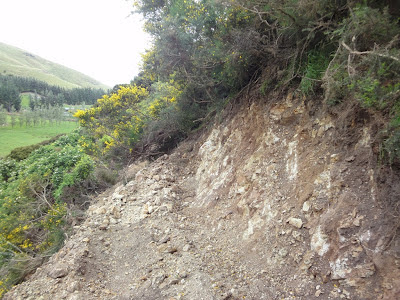 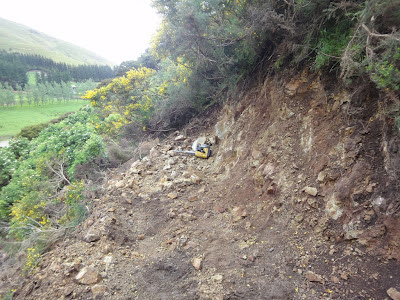 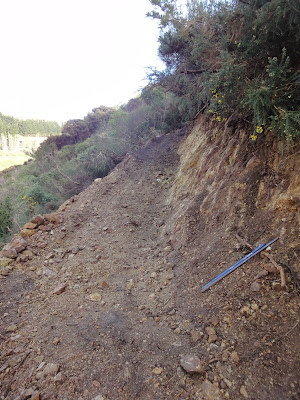 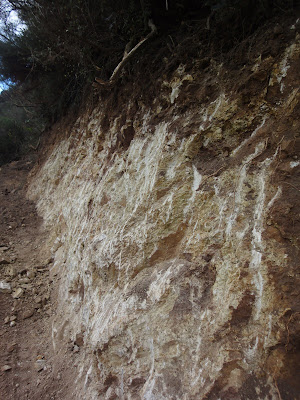 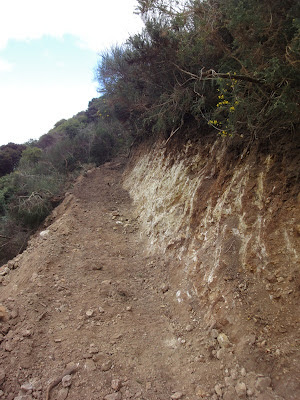 After much love, moving a zillion rocks and raking away, it’s done. We ask that you act impressed when you ride by, even if you aren’t! 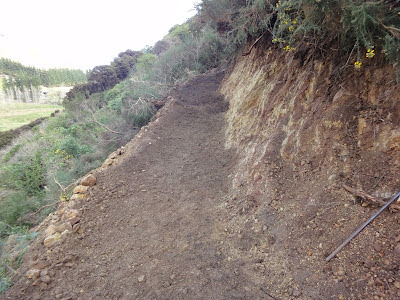 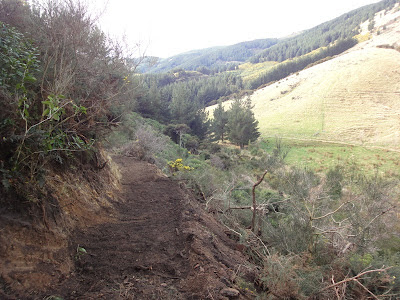 I had been keeping an eye out for the sun to give it’s farewell sign on our hills, but it seems I missed it. I was enjoying the easy digging, but I had no lights and needed to get back. I knew I had quite a journey to get out and I would need to dig my way out of the two traverses below the rock face. I tidied up again on the way out and there was a veritable mountain of rocks and dirt and dust on the first traverse below the rock face. But it wasn’t too hard to clean up and push through. There was less rubble on the next traverse which was good as it was starting to get rather dark.

I arrive home in total darkness, happy and whole. A lot of mind-numbing work but a good outcome, screw doing any of it by hand!

Monday after returning the Digger, I got stuck into raking and sculpting the tracks as the forecast was for rain and I wanted to get as much work done as possible. After many hours moving rocks, raking dirt and trimming back the foliage, I was spent. Had a pleasant chat with my neighbour about their proposed trails and tree planting and had a recce from their side of the hill for the next section. I was having a wee hoon on the quad bike up the 4WD track and out to Miners Track when the heavens started to open. I whizzed back home and the rain hasn’t really stopped. A good watering for our new trails and new plants. 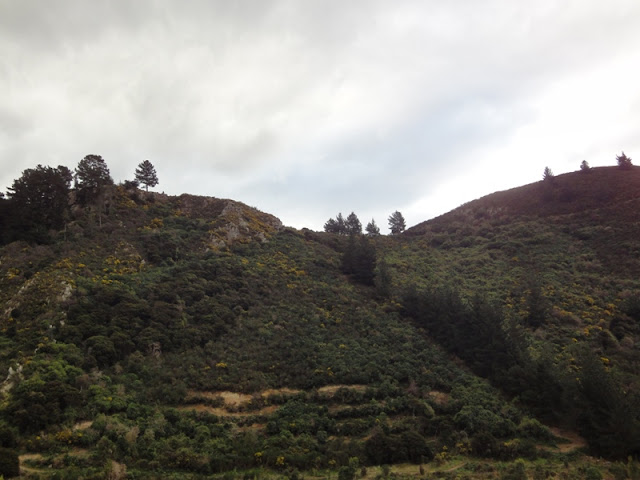 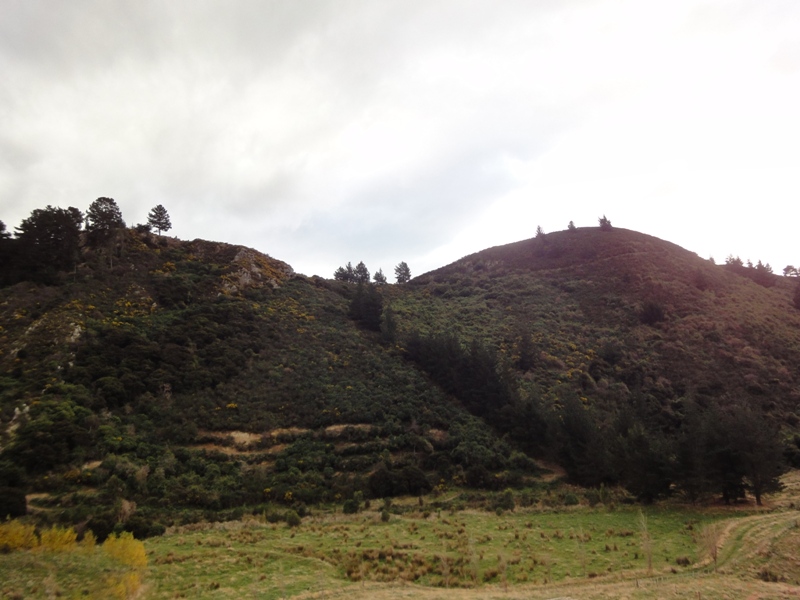 Hopefully this weather doesn’t last too long and we are back into our abnormally good autumn which, with luck, will be a cold dry winter.