Another month has passed and lots of action has been happening behind the scenes.

Alister has been working hard on his track – he has cut a line through the jungle from top to bottom – which in itself is quite an accomplishment, but this month he has been working on making sure the corners work before finishing up with the bench. Mrs Haven has been helping with the trail corridor and I went and helped widen it with the chainsaw this week. It’s looking spectacular with much of the track winding itself across the gully in total canopy under maturing Mahoe and the odd Elderberry. It’s a magical magical feeling and I am very excited about this track and can’t wait to get rubber on the track!

Mrs Haven and I have been working on the trail corridor, spraying and mowing and cutting it all back to make sure the trails are in pristine condition.

We have had a lot of visitors as well, which has been great. A couple of large sized groups as well, which has helped bed down a lot of the newer tracks. From all accounts, all the visitors have been enjoying themselves. We love showing people around and sharing our trails, you should contact us to have a go as well.

Earlier in the week, Colin came round to work on the skills area again. We had left it with about 8m of boardwalk completed, with a lot of time and effort spent determining what would be the best way of building the skills area and key measurements. This was going to be a key section as we lead into the most technical skill – the teeter-totter. But we were right back into it, this time with a generator to help speed up the processes. Colin got straight into building our first corner with a nice easy camber and then  a roller with a dip ready to set up for the next cambered corner. The day went extremely well, and only a small section left to build with the remaining wood – perhaps enough to build the teeter-totter and a couple of ramps. We couldn’t wait until we had an opportunity to ride it, but we had run out of nails, so most of the tread wasn’t laid, so tempting and exciting. Soon though. 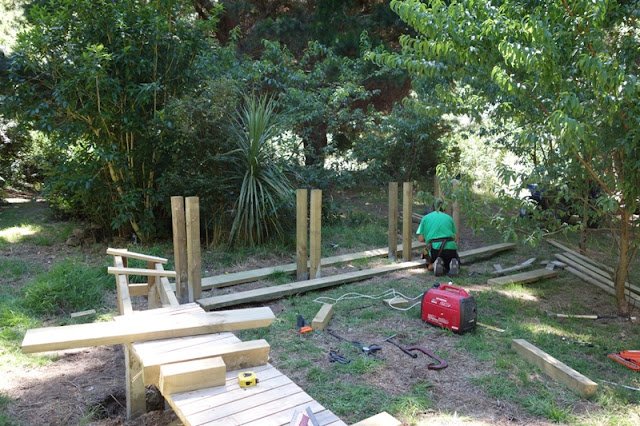 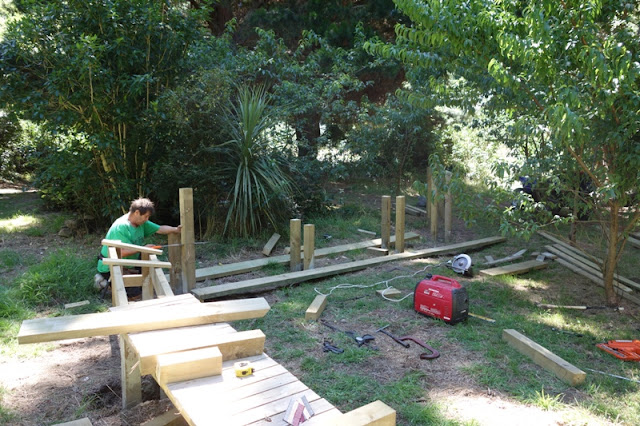 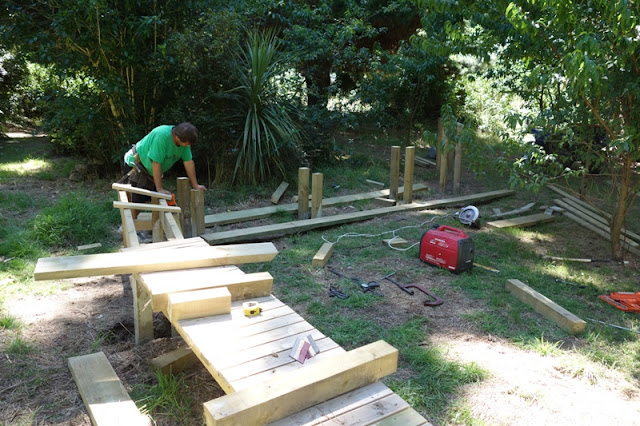 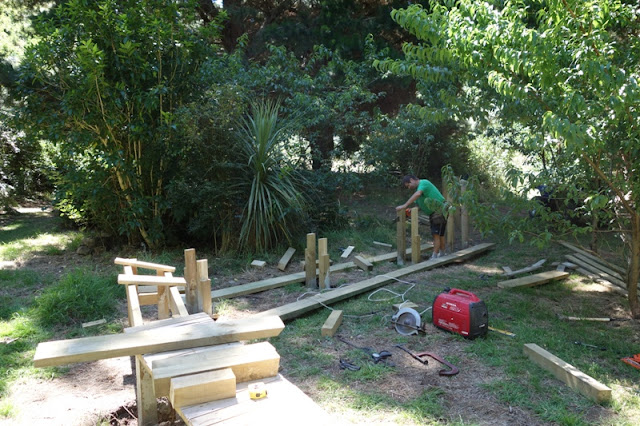 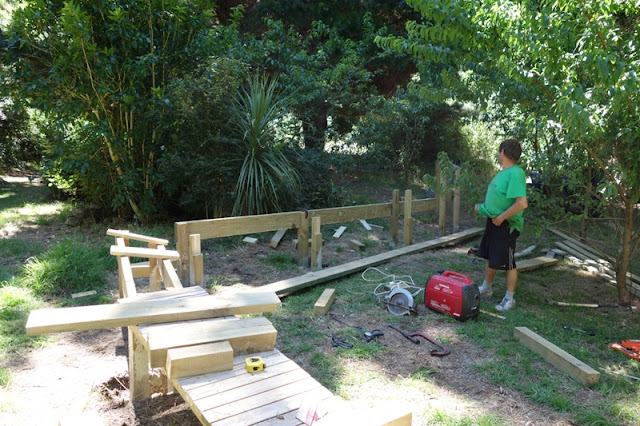 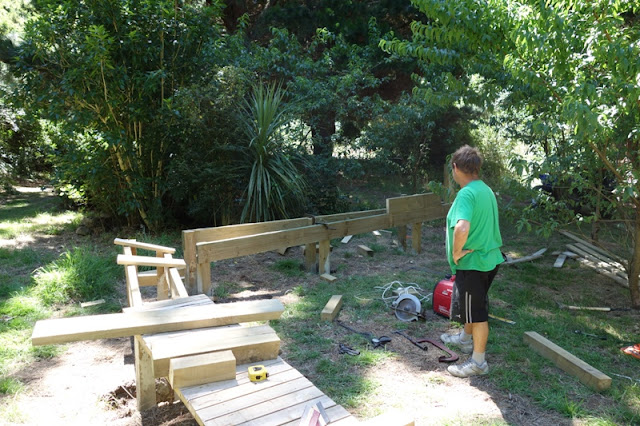 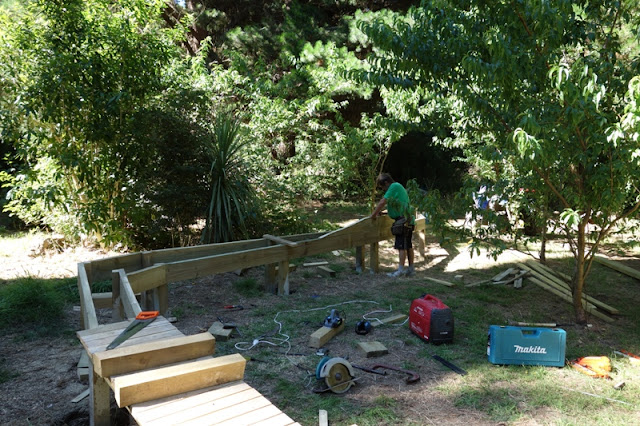 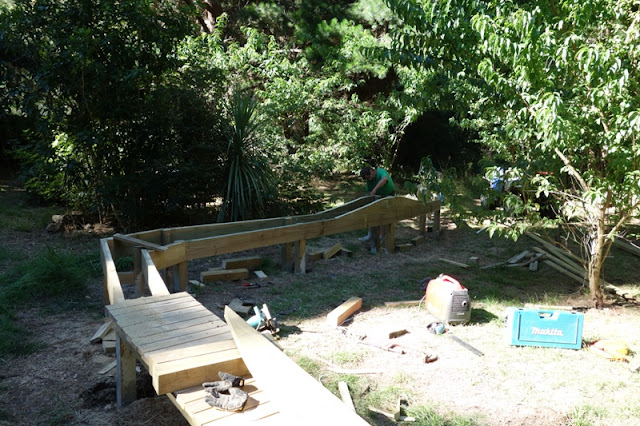 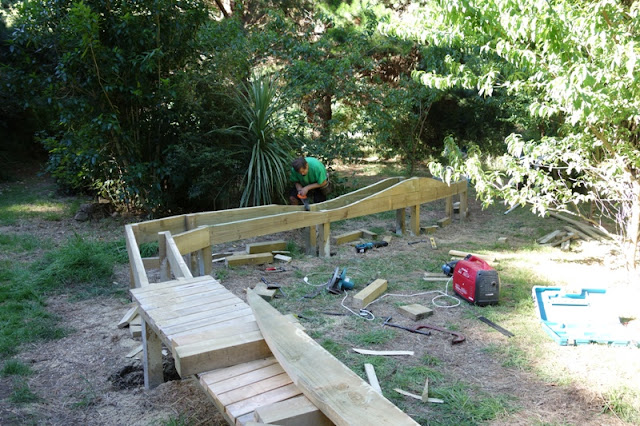 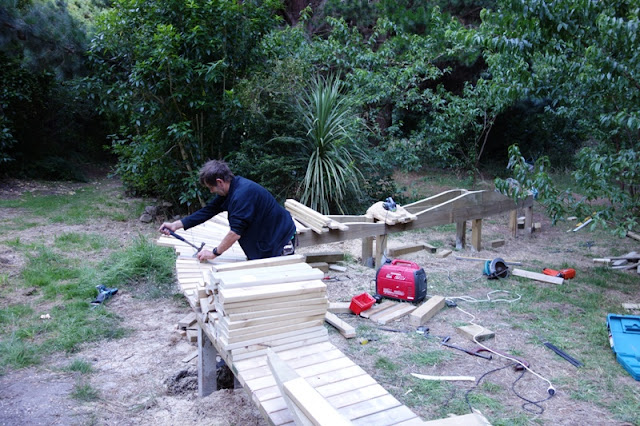 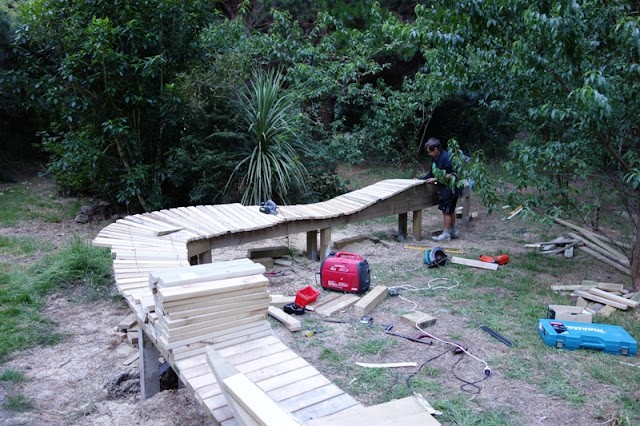 Saturday dawned another beautiful day at Haven – I went off to help Alister on his secret track and Lisa led some final work on Project G and Fred. Another good hard working crew and soon Alister and I had extra company in the form of Colin to help out. I was continuing to widen the trail corridor with the chainsaw and then helping with some benching. Good honest work. Lisa had also done great work with Andy and Kev fixing the much too tight corner on Project G and then off to Fred with Kev doing a fantastic job on the chicane through the pines. Andy showed off his prodigious strength by pulling out the waratah that was in the way on the mighty chute. The crew then did a slap up job on rotten rock corner which unfortunately had lost a fair amount on the exit line with heavy rain not long after it was built. It looks pretty exciting and I can’t wait to hit it at speed once it has seasoned. Colin and I gave the guys a hand with tidying up the lower traverse and fixing up the off-camber-ness. Great times. Then it was Ice-blocks and goodies at the Skills Area whilst Andy’s son Amos showed off his skills on his electric trials bike. Amos also did a great job of testing out the new lines on Fred too! Afterwards Colin and I went for a ride, sticking mostly to the tracks under canopy as it was pretty damn hot!

Saturday night we headed over to a neighbour’s place to test out his new monster sound system – loud enough to easily hear a kilometre of so away – awesome. We also had fun with a quad bike convoy looking at the major deforestation under way near the Packhorse. Great fun, we should do it again soon. 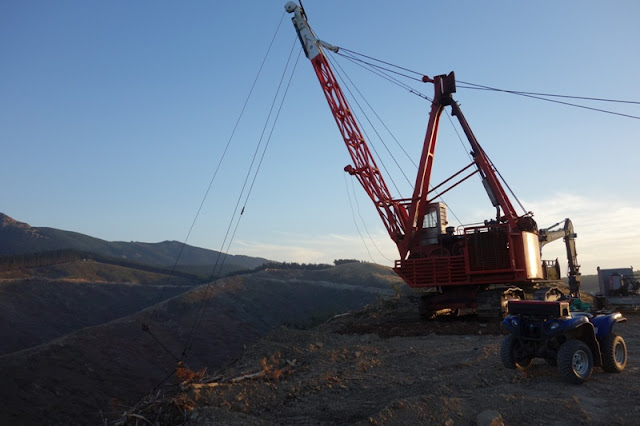 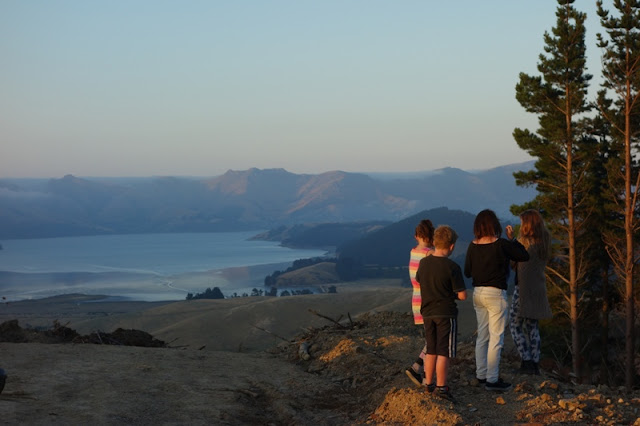 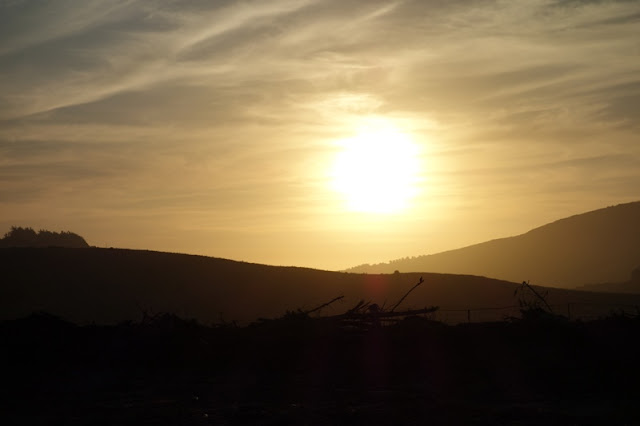 Sunday, Lisa and I got stuck into nailing the remaining tread down on the Skills Area and of course the taste test! Fun times indeed, I can’t wait until the first stage is finished and opened officially. I also had a quick go at putting a boardwalk over the fallen pine, but alas the angles were wrong from my attempt and will require a bit more carpentry skills beyond mine to get it right – next time! 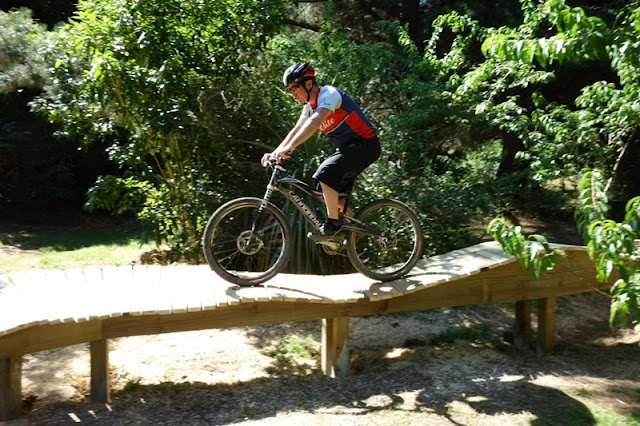 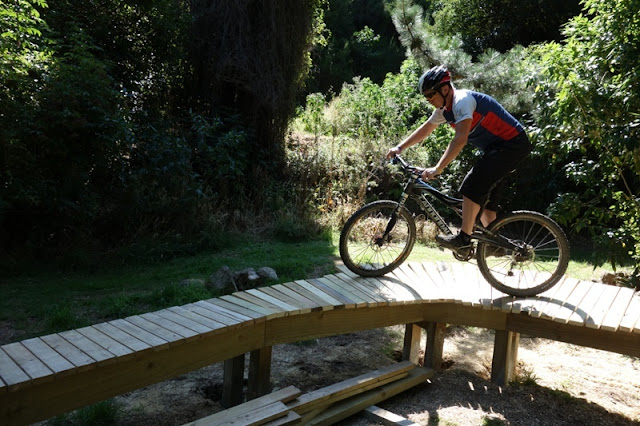 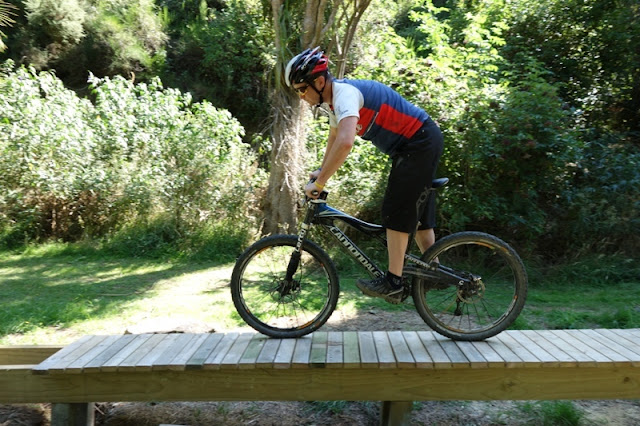 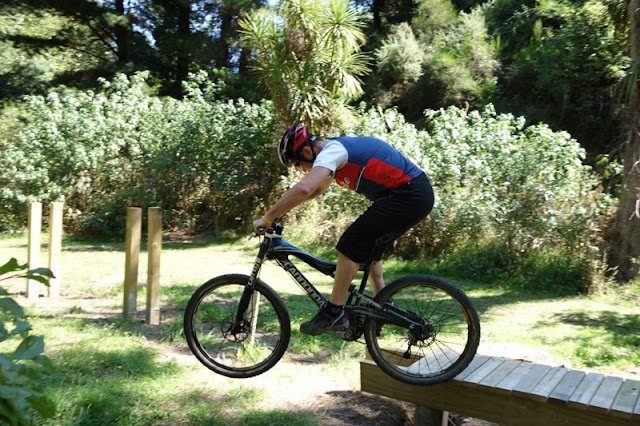 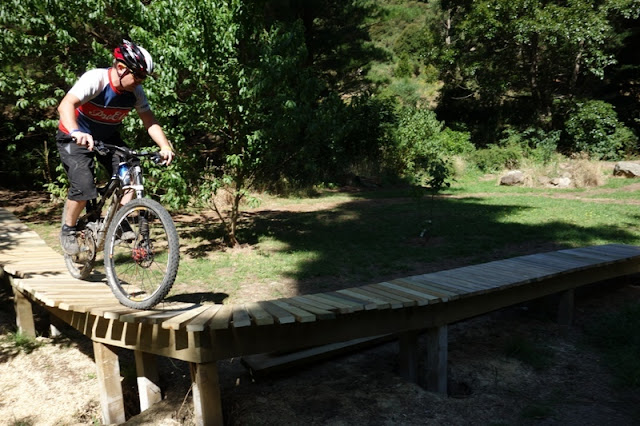 It still looks like a lot of summer is here for a while, so you should make the most of it and come and try our trails out, we have lots on offer and something for everyone. Haven the best little intermediate mountain bike park in Canterbury.

Our next scheduled Dig Day will be Saturday 9th March 2013 from 10.00am (weather permitting.) 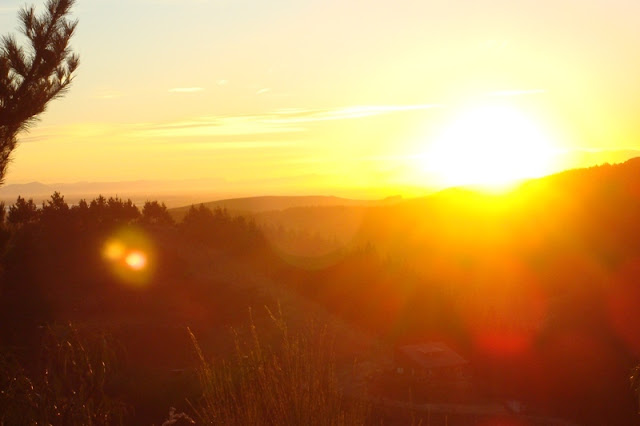