After an early week forecast of a rainy Armageddon, we were stoked to miss it all and we were able to get the first Digger session of the year underway!

Col was pretty excited about getting on the Digger as well. I had a wee session on Friday night on one of the early extensions to River track that for a number of reasons got left behind on the trail developments. Since we had learnt a lot about what we wanted and what the Digger was capable of, we had a bit of tidying up work to do, dropping the incline of one of the climbs and widening and re-shaping the corner. Although we weren’t able to get the corner as wide as we had originally planned, rocks that won’t budge, the corner and climb is more manageable for a greater number of people. Job well done.

We then re-opened the traverse and cut in a nice swooping downhill chicane with a fast berm run-off to help build speed. Well that’s how it’s going to look after a bit of weathering and another digger session. The main line is in and feels great, now just some buckets of dirt and some delicate work by hand under the direction of the Berm Queen. It will be a wee challenge to ride up the “other” way but you are rewarded with some speed and berms as well!

We had Jon help us out raking and smoothing after the Digger and I am sure he appreciates how much easier the Digger makes our toils. Lisa and Ali continued their fine work fettling parts of the singletrack up on the Upper Tracks.

We had a bunch of visitors as well, and they seemed to have enjoyed themselves. It’s always good to see people riding the trails as we make new tracks.

After a hearty meal, a couple of beers and a well earned sleep, it was back into Digger action, this time the other decision point on our journey up the river. With the big rain last year we had a bit of track underwater, so we tidied that up, re-opened the line and fixed the river crossing so that whilst it isn’t going to be easy to ride over, it won’t flood quite so often.

This track is currently stuck with a 2m ridge of rock that won’t go anywhere. We have already had a go with the Digger, a rock breaker and the Digger again but it is 0-3 to the rock ridge. We had a quick look at switch backing up and over it, but decided it would be a bit steep and the terrain was reasonably rocky as well, so it would take ages. One of our neighbours have offered their skills at blowing stuff up to have a go at making space this way. At the moment, it seems the best way forward. With this, we continued on to the current end of this “unnamed” track, and continued the fun of exploring and building virgin track. We will open up the naming of this section of track to club members when it’s finished.

We cut inside one of the features at Haven – a fallen over pine that just keeps on growing, through an old fence line, around, up and then following the old bench along the fence line as it traverses over the waterfall through to the gorge. This section went very smoothly and looks great. We are now in an area I was originally nervous about, the tightest part of the gorge, which on our first explore seemed to have plenty of rock, but following along in our current direction, it looks pretty good and with great views of native regeneration, the creek and surrounds. We should be able to stay above the flood line as well, which would be great. Once we are through, this section, we should be able to build some really exciting tracks. I think we will call this section of trail – Fenceline. 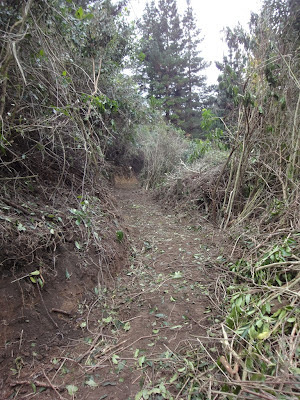 We had another crew of riders out today and again there seemed to be lots of grins in evidence, so it was a busy weekend all round. I was pretty shattered at the end of the day, but very satisfied and excited about the work and where we are headed. Col had quickly gotten into his stride on the Digger, doing a magnificent job.

Next Dig Day we will be extending our tracks, making big beautiful berms and focussing on planting around 500 natives, so we would love to have your help and assistance, even it’s just by riding around the tracks.

We are still experiencing beautiful weather and the tracks are sweet and tacky, it’ can’t last for long, call us or email us to make a time to ride our trails.