Another weekend and another super session with the Digger.

A quick update on the storm of last week, thankfully everything has drained nicely and firming up again, we will start repairs on the next dig day (12 November.) The water receded very quickly thanks largely to the outlet on Lake Ellesmere being open. On the seal road, there was standing water over the wheels of cars during the day, but by evening it had gone.

Here is a during and after shot of the same location. 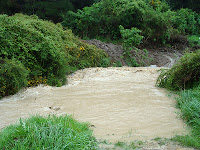 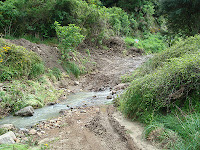 So back to Miners Track, I decided to get the digger again but couldn’t use it on any of the recent tracks with them being too wet, the digger weight would just undo all the hard work, I had already completed a bit of a recce and the 4WD track was OK with no slips and the top of the land had drained nicely. There was forecast rain during the day on Friday and then good all weekend. So away we went.

The journey up the 4WD wasn’t pleasant, I was terrified, it was super steep and the digger kept tipping and slipping. I’m pretty sure I freak out much much earlier than any potential trouble, but it wasn’t fun especially as it was my first time up there. But we made it, a few more grey hairs, but safe and sound.

We had the forecast rain during the day and so I got stuck into a corner that we were coming back to on Eagles Nest, basically it had a bunch of huge rocks we couldn’t break, so I was going to try and dig them out. After not much success, it started to rain quite heavily and I wasn’t a happy chappie at all. I clambered over the rock and headed out to where we had got to on Miners Track.

For those who don’t know Gold Valley supposedly had gold back in the mid 1880s and a bunch of Adits and a vertical shaft were made on our land. This benched “road” was access to the vertical shaft.I got a wee bit further than Col had made a turning bay for the quad bike and with it still raining I chucked it in. Curses to the weather gods.

The next day was as forecast, the existing tracks were a bit slippery but as I got into virgin territory, it was nice and dry and good to work in. There was a good news/bad news situation working with an existing bench that had overgrown over at least 15 years. With it being a rock wall bench, there wasn’t too much dirt that had built up over time, so if I dug up too much soil, I hit a lot of rock from the original track that took ages to get rid of, and so I had to get used to working off-camber on a downhill at the top of our land with a nice drop off the side. With a reasonable high centre of gravity and no suspension it took some getting used to, but once I did, I flew through the work. A few sections of tangle weed and some bigger broom were the only things that really slowed me down. 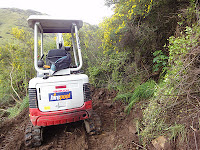 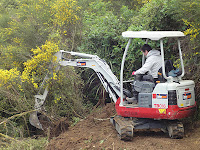 It got kind of boring following a “road” being used to making wiggles and making fun diversions, but it was awesome being in another area that I have never visited. By the end of Saturday I was about 50m from the end and in an area that Colin and I had explored from a couple of years ago. The bench wasn’t as visible in this section, so it was easy for us to think it was a track here already but not 100% certain. If we had kept bush bashing for another 50m we would have hit the road section. 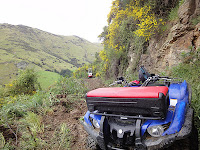 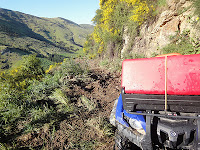 One of the main reasons for me wanting to get this track completed was so that we could clear our boundary lines of broom and thus end our friendly letters from ECan about getting rid of it. Plus it should be a blast to ride, being pretty much downhill all the way, it affords some stunning views of Lake Ellesmere, the Pacific Ocean and of the Southern Alps, a magical land indeed.

I think I may have found a relic of the mine and potentially the mine itself, with a faded sign with an arrow and a vague trail heading up to the rock face. Definitely worth an explore! 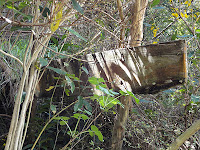 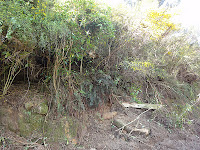 On Sunday morning I broke through to the fenceline, bliss! I then decided to clear a nice turning circle, which would make it nice for the quad bike and trailer to park up, clear the necessarily broom from the boundary and set up the area for the AYUNC Track for when it would meet up and then where the proposed downhill track will go as well. It all went wonderfully. I discovered an old channel that fed a wee pond, which was quite deep, which was a very welcome surprise. I may have found a spring as well, as moving through the bench, I seem to have found a water source, that bubbles up from the ground. Fingers Crossed, it may be able to be used to irrigate the far end of the property. 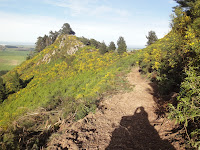 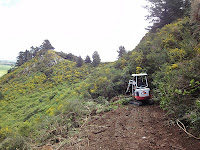 After a hearty lunch, I finished by tidying up the corners and killing more broom and heading up to the next major challenge. In my head Eagles Nest will continue from where it is to Miners Track. The catch is the top of the mine is a very narrow and large cliff face and with our property boundary, we have just about 2m of space and very steep and potentially quite rocky for about 100m. I managed to build a track to the start of the steep section and decided to wait until more experienced heads and hands were at hand before progressing further. It should work… 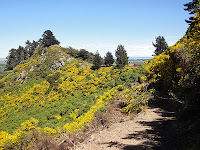 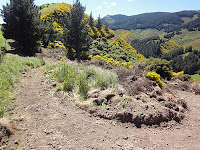 And here is Miners Track in all her glory, 571m of mostly downhill with some killer views and nice regeneration going on!

On Monday, I made a turning circle at the end of Eagles Nest, tidied up some corners and then heading down the 4WD track which was much more comfortable than heading up. I then did some community service, opening up the drains on Gold Valley Rd and clearing a slip on our neighbour’s land, since their digger is feeling poorly at the moment.

Not sure where to next week, potentially back to AYUNC, if it has dried up enough, maybe some maintenance, back onto Frank’N’Furter or maybe Eagles Nest! So much choice!