So we’ve been going on about an unusually mild winter, next to no rainfall blah blah blah. A couple of times I have suggested that we were in for a big dump of snow and well what do you know it happened.

In fact the night before as we were at the neighbours for Andrew’s birthday party, Jo was telling us about how it used to snow heavily every couple of years but it hadn’t really for the last seven years or so and we all thought that would be great.

Last night, it started snowing and then not, rain mixed in with sleet and hail but not really settling on the ground, temperature and barometer steadily dropping. Then we had a particularly long and nasty period of hail that covered everything then it snowed and didn’t really stop for a while. The cars were soon covered, as was the drive.

It got pretty damn cold and the fire was packed to the brim with Macrocarpa to cook through the night. In the am, it was nice and warm, well inside, but pretty brisk outside and rather white. I had a go at driving down our drive in light snow previously and the experience was so bad, I vowed never ever to do it again. The snow this time was about 5x times as deep, so no go there.

Lisa and I went for a walk mid-day and planted some of the new trail signs around the park, nicely camouflaged for winter riding conditions. 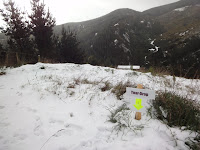 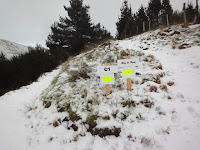 Loki was not impressed with the conditions and was pretty happy to be carried home it would seem.

We got 5cm of snow under the verandah and between 10 – 20cm everywhere else. Snow storms and flurries have continued through the day and the snow hasn’t really gotten any lower. The valley and hills around us are snow laden which which is pretty impressive considering it’s mostly gorse and scrub not low grassy farmland.

I hope it doesn’t freeze tonight as we could be stranded (oh the hardship) for more than a day if it does.

Snow, more Snow and Snowed In